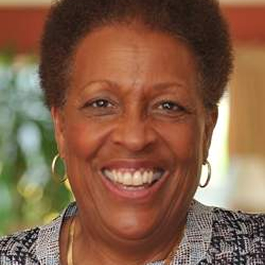 Jolie Johnson was most known for her friendliness and positivity. Once you met her, she was unforgettable. She was larger than life and so were her accomplishments. Johnson not only lived her life dedicated to providing advancement for women’s leadership but also in support of nonprofit organizations helping to make a positive impact on the community’s most vulnerable populations.

Jolie was a member of the Providence Medford Medical Center Community Board for 10 years and served on the board of La Clinica for 6 years. Johnson was also a major contributor in bringing together three different agencies to form what is now known as Community Works. She also served on the Development Committee for the Children’s Advocacy Center, was a leader in Girl Scouts of America, and was a member of the Rogue Valley Association of Realtors. She served three terms as President of the North Medford Rotary Club and current member of the Rotary Club of Bear Creek at the time of her passing. Johnson was also on the Women’s Leadership Council and was a founding member of Women Living Leadership through the United Way of Jackson County.

Keenly aware of the needs of the less fortunate in her community, Johnson lived a life in service to and advocating for the most vulnerable in our community.

Ms. Johnson was born and raised in San Bernardino County, California. She later graduated from the University of California Santa Barbara. In 1987, she relocated to southern Oregon and launched a long and remarkable career as a real estate broker with local company John L. Scott. In her spare time, Jolie enjoyed traveling, golfing, skiing, scuba diving, reading, cooking, and spending time with loved ones.

Johnson’s inspirational personal, philanthropic, and professional leadership made a tangible and lasting impact on our community. In celebration of Jolie’s significant contributions, including the Women’s Leadership Conference of Southern Oregon, we have created this award in her honor.

We are looking to celebrate women in our community who advocate for others and support causes that echo Jolie Johnson’s legacy.

Please nominate a leader for this award so we can present the outstanding leader with the award at next year’s conference.